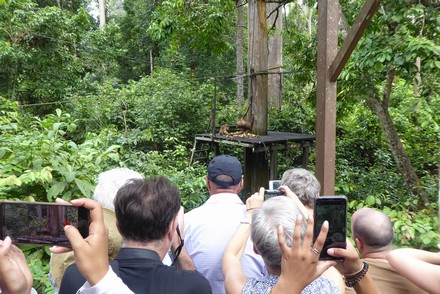 For more than 15 years until early 2020, the SWD allowed members of the public to pay and be part of the rehabilitation process (another form of tourism) at the SORC, humanising the apes to humans from a young age. Humanised orangutans released into the SKFR are then exposed to large numbers of tourists daily – exacerbating the humanisation impact.

The last three points above refer especially to ex-rehabilitants who have been released into a forest. All points above can have dire consequences on the future of a Critically Endangered species fighting for its survival.

While staff do try to control the crowds during visiting hours at the SORC, it is a challenge to manage the movement of every tourist and humanised orangutan, as our video shows. Tourists have been attacked at the SORC (see here and here). We have previously received reports of orangutans mugging tourists of their belongings and have been told of ‘problem’ orangutans allegedly suspiciously vanishing from the SORC; SWD and KePKAS officials did not respond when they were asked about this. 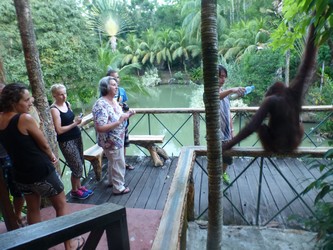 We are not aware if there is an entry limit to SORC, but it’s certainly not four. In fact, depending on the month of the year, over ten times the recommended amount of tourists by the IUCN can be seen during a feeding session.

Since our investigations began at the SORC nearly ten years ago until early 2020, we have never observed tourists visiting the centre being obliged to wear a face mask, and we have only rarely seen staff in charge of tourists wearing one. The COVID-19 outbreak forced the suspension of tourism at the Sepilok area in March 2019. The SORC reopened for tourism in June 2020. Although tourists have been required to wear a face mask since reopening, images show lax enforcement of this requirement. The centre suspended tourism for the second time in September 2020 following the increase in COVID-19 cases in Sabah.

The use of respirator or face masks should be made mandatory including post-COVID-19 period, and they should be worn properly at all times, because:

The Sabah Wildlife Department may argue that tourists are not allowed into areas where the rehabilitation process of SORC orangutans take place. However, for more than 15 years until early 2020, the SWD allowed members of the public to pay and be part of the rehabilitation process at the SORC, as stated above. This voluntourism practice would have humanised orphans undergoing rehabilitation for wild release. In addition, it is wrong to assume that orangutans are successfully rehabilitated when let/moved out of rehabilitation areas: they still have to learn and persistently prove that they can forage and survive independently and integrate into a forest’s orangutan community – away from tourists. This, however, may be a challenge at the SORC. A British orangutan organisation which supports the SORC made the statement below regarding the previous sending of orphaned SORC orangutans to a luxury hotel in Sabah under the guise of rehabilitation. FOTO stopped the exploitation in 2016. The highlighted parts below may refer to the effect of humanised orangutans at the SORC on orangutans undergoing rehabilitation at the centre. 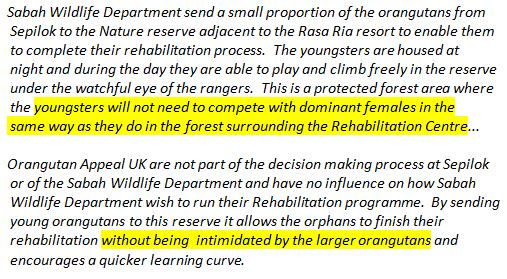