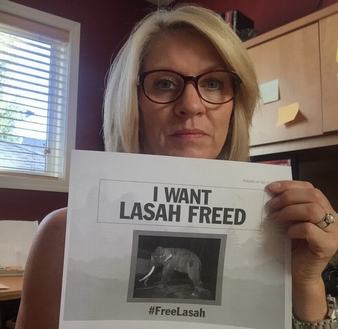 On May 10th the Malaysian environment ministry announced that Lasah will remain at the Langkawi Elephant Adventures [LEA] after an evaluation.

In a publication by a government owned news agency [re-published by The Sun Malaysia] the ministry claimed that Lasah is in a “healthy condition” based on checks by the Wildlife and National Parks Department (Perhilitan) and the Malaysian Association of Zoological Parks and Aquaria (Mazpa). Mazpa has previously said that elephant rides provides Lasah with exercise, an excuse while ignoring the fact that elephants used in rides are abused.

You may read the government’s response at the link below:

– Our concerns regarding Lasah’s health, use and abuse has never been addressed to us, including in the article above.

– In March, eight months after the campaign for Lasah started, the environment ministry finally said that “only two of Lasah’s legs are tied” [when not exploited for tourist money] and called it normal practice.

– LEA claims Lasah was chained on all four feet to help him recover from wounds. We responded, no one replied. Our response here: http://tinyurl.com/fmtlasah

– The ministry and LEA claim the latter abides by the law. However our emails to the former regarding Lasah’s [daily] chaining relating to Malaysian wildife laws were never responded.

What you can do today:

1. The wildlife department posted a photo of Lasah on their FB page with a quote “Lasah safe in Langkawi”. Please comment: http://tinyurl.com/lasahperh

3. Donate, please help us keep our campaign going. Click on the donate button on the right of this page. Any amount will be of help.

We will not give up on Lasah and will continue campaigning. More updates soon. Thank you for all you have done so far.

Friends of the Orangutans Malaysia