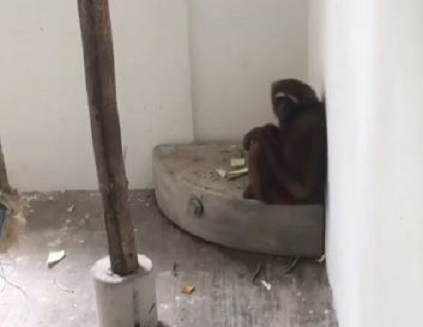 The animal in the image above is an Agile gibbon, an endangered species, at the National Wildlife Rescue Centre in Sungkai, Perak. It is a government-owned centre managed by PERHILITAN, the peninsular Malaysia wildlife department.

The appalling state in which the gibbon is kept is revealed in this video. The size of the almost barren concrete enclosure is too small for active animals like gibbons.

The enclosure desperately lacks sufficient ‘furniture’ and enrichment to enable the gibbon to exhibit natural behaviours of a wild gibbon, including brachiation. The gibbon does not get much exposure to the sun, which is essential to maintain healthy skin and coat. It is unacceptable for an animal at a rescue centre to be kept in this manner. What about the condition of other animals held at Sungkai?

According to the report, thousands of animals had died between 2016 and May 2017, including gibbons and 1000 Indian Star tortoises. A source for The Star revealed PERHILITAN’s “lack of expertise and knowledge” to manage animals in their care led to the deaths.

The same source indicated that PERHILITAN’s lack of knowledge in caring for animals in their care also led to neglect and that animals “were not properly fed, given the right diet, or housed in proper facilities.” This extremely worrying revelation, in turn, “caused the animals to be stressed from captivity, thus making them prone to disease and death.”

The then CEO of WWF-Malaysia, Dr Dionysius Sharma, suggested in 2017 that an independent wildlife centre would be able to rehabilitate some of the animals confiscated by PERHILITAN, in the hope of releasing them back in the wild.

As of 2020, FOTO is aware of only one independent/NGO rescue or rehabilitation centre in peninsular Malaysia, the Gibbon Rehabilitation Project (GReP). A recent Malaysiakini report noted that the GReP “rescues gibbons from captivity and rehabilitates them for an eventual return to the wild.”

What has changed since the report by The Star came to light? What is PERHILITAN’s plan for the gibbon stated above? PERHILITAN should explain publicly.

What can you do? Social media is a powerful tool for change. We have created a tweet for you to voice your concern directly to PERHILITAN. Click HERE to tweet now.