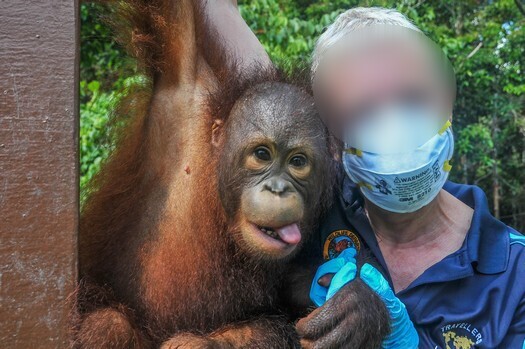 15 July 2020 update – Travellers Worldwide ceased trading in February 2020. The Sabah Wildlife Department confirmed in June 2020 that members of the public would not be allowed to take part in the rehabilitation process of orangutans at the SORC any longer. Read our statement here.

We have previously highlighted how British company, Travellers Worldwide, had been exploiting orphan orangutans at the Sepilok Orangutan Rehabilitation Centre (SORC) through their volunteering programme. The SORC is managed by the Sabah Wildlife Department (SWD), the state wildlife agency under the Ministry of Tourism, Culture and Environment (KePKAS) Sabah, With the approval of the SWD, the programme involved unqualified individuals paying to join the rehabilitation for wild (forest) release of orphan orangutans at the SORC.

We have explained why the volunteering (or rather, voluntourism) programme needed to stop. We also explained to the company, SWD, and KePKAS. No one responded.

At the end of February 2020, Travellers Worldwide ceased doing business entirely (not as a result of our campaign).

We are concerned that a different company or the SWD/KePKAS ministry itself might continue to exploit the SORC orangutans through another volunteering programme.

After Travellers Worldwide’s closure, we wrote to the KePKAS minister, Christina Liew, and the SWD to explain why the programme should not continue. We have yet to receive a response. Neither KePKAS or the SWD have publicly confirmed that the volunteering programme will stop completely.

The SORC is a controversial orangutan rehabilitation centre, and the SWD’s management of the centre is highly questionable. For almost 20 years, the SWD supplied orangutan infants from the SORC to a luxury hotel in Sabah on the false pretence of rehabilitation. We campaigned and stopped the exploitation in 2016.

The SORC is open to tourism, which goes against the International Union for Conservation of Nature’s (IUCN) guidelines on great ape tourism. Read how tourism at the SORC impacts orangutans.

We have previously received reports of SORC orangutans mugging tourists of their belongings and have been told of ‘problem’ orangutans allegedly suspiciously vanishing from the SORC; KePKAS and SWD officials did not respond when they were asked about this.

One SORC orangutan’s future is in serious doubt, and the SWD appears to have plans to release two orangutans into a forest reserve under questionable circumstances.