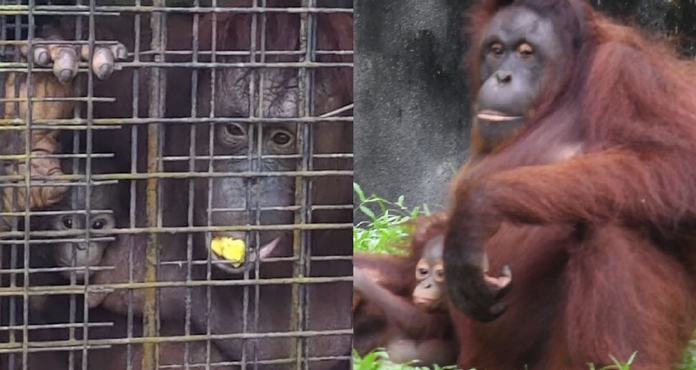 We contacted Taiping Zoo in September to ask about its purpose for breeding orangutans. In its response, the zoo stated that its reason for breeding the apes is to maintain a viable captive population in case a need to reintroduce them into the wild arises.

Captive breeding of orangutans is not conservation. Tweet to PERHILITAN, the Peninsular Malaysia wildlife dept., to ask them to stop Malaysia zoos breeding orangutans. CLICK HERE to tweet now.

Friends of the Orangutans (FOTO) believes zoos want exotic animals such as orangutans, chimpanzees and tigers – and especially cute newborns – to increase visitor numbers. In other words, orangutan breeding in captivity is about profits.

On average, wild-born orangutans spend around seven to eight years with their mothers. The first few years of life are crucial as infant orangutans are taught a wide range of skills on forest survival such as nest-building, avoiding predators, foraging and integration into a wild orangutan population. The natural conditions in a forest are near-impossible to replicate in a zoo.

The International Union for Conservation of Nature (IUCN) indicated in its guidelines for the wild reintroduction of great apes that it is a significant challenge to rehabilitate and release rescued wild-born infant orangutans that had not lived in the wild with their mothers for at least a year. Such is the importance of mother-infant interactions in the wild.

Orangutans in zoos may also be too habituated to humans; over-habituation to humans can cause forest-dwelling orangutans to be more susceptible to poachers and hunters. Additionally, captive-born and bred orangutans may not be as resistant to diseases as wild orangutans.

Breeding orangutans in captivity with the aim of releasing them into a forest is currently not common practice in the area orangutan conservation. The IUCN does not include any orangutan species in its list of wildlife species for which captive breeding has been recommended as a conservation action.

Katarina’s origins are unknown, but she will remain captive for life. Both Wasabi, who was born at Taiping Zoo, and the two newborn infants will remain in captivity for life, and die without ever knowing what a rainforest is.

According to an article by two wildlife experts, orangutans do not and cannot thrive in zoos. Orangutans are highly intelligent and complex animals, and it can be a challenge to meet their needs in captivity. Till this day FOTO continues to reveal substandard living conditions of orangutans in Malaysian zoos.

In September we revealed a distressing image of Wasabi with her new infant inside a dilapidated cage at the Taiping Zoo. The cage is off-limits to zoo visitors; they are not allowed to see where the zoo orangutans are kept when they’re not in the outdoor enclosure. 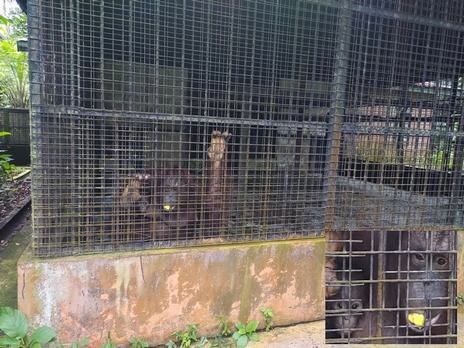 Image: Wasabi with her newborn infant at Taiping Zoo

Legitimate ape sanctuaries that care for rescued orangutans do their best to avoid animals in their care from breeding. According to the Center for Great Apes, a sanctuary caring for unreleasable orangutans and chimpanzees, it is irresponsible to intentionally breed great apes and add more individuals to a life of captivity when there are already so many in need of rescue.

Before arriving at Taiping Zoo, Katarina was kept alone in a dilapidated zoo in Kuala Lipis. Six years ago, FOTO campaigned for her to be sent to a sanctuary, the Matang Wildlife Centre, near Kuching, Sarawak. The sanctuary does not breed orangutans.

However, PERHILITAN, the Peninsular Malaysia wildlife department, instead sent Katarina to Taiping Zoo. We only found out about Katarina’s transfer to Taiping Zoo through media publications.

Instead of breeding orangutans in captivity resources would be better spent on genuine orangutan conservation efforts, such as protecting and connecting the habitats of wild orangutans, addressing human-orangutan conflict and tackling the illegal wildlife trade. Support from the general public to fight deforestation is also crucial to secure the future of dwindling wildlife species.

What can you do today? Ask PERHILITAN, the Peninsular Malaysia wildlife department, to stop the breeding of orangutans in zoos. CLICK HERE to tweet to PERHILITAN now. If you are not from Malaysia, please send contents from this article to your local elected officials and zoos and demand the same of them.