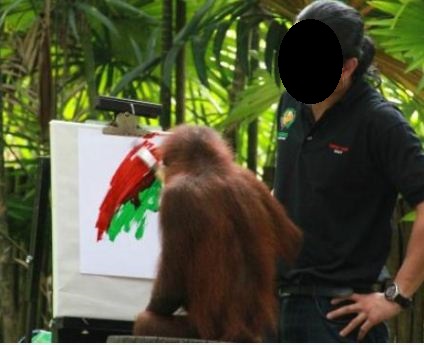 Malaysian online paper Free Malaysia Today published a edited version of our Press Release regarding the horror use and exploitation of a ex-rehabilitant orang-utan at the Sepilok Orangutan Rehabilitation Centre (SORC) in Sabah, Malaysia.

Mowgli, who will turn 13 this year, arrived at Sepilok aged only a month old after his mother was likely killed by oil palm plantation workers. Mowgli was sent to the 6-star hotel Shangri-La Rasa Ria Resort a few hours away from Sepilok for commercial purposes, but under the pretence of rehabilitation. Next, he was sent to the local zoo and was used in its animal shows and Mowgli was made to paint among others.

The Sabah Wildlife Department now plans to release Mowgli into the Sepilok-Kabili forest. Read below why this must not happen. Friends of the Orangutans is working on this matter and updates will be published here.

Below is the full and unedited version of our Press Release:

A local orangutan NGO is up in arms over what it claims is a case of exploitation of an orangutan in Sabah. Mowgli (13), is an orphan orangutan who arrived at the Sepilok Orangutan Rehabilitation Centre (SORC) for rehabilitation when he was only a month old in 2002, and is said to have been exploited by irresponsible parties since infancy and there are fears over his wellbeing in the near future.

According to Malaysian orangutan NGO, Friends of the Orangutans (FOTO), Mowgli was sent to the Shangri-la Rasa Ria hotel at age two and back at Sepilok three years later and transferred to the Lok Kawi Wildlife Park zoo near Kota Kinabalu, where this orangutan was used in animal shows, performing tricks including painting.

Upreshpal Singh, Director of FOTO said “What has been done to Mowgli is a tragedy. His is a tragic case of orangutan use and abuse, which still happens in Sabah till this day. He has been on the receiving end since only a month old, when his mother was likely killed by oil palm plantation workers.

“He was sent to the Rasa Ria hotel for commercial purposes under the pretense of rehabilitation and next to the Lok Kawi zoo to be used in shows. His chances of an independant life in the forest was wrecked since he was an infant, and this is utterly unacceptable.”

Singh added the Sabah Wildlife Department (SWD) indicated to the NGO that Mowgli will be rehabilitated at the SORC for eventual release into the Sepilok-Kabili forest, which is 4,400 hectares in size. This comes after Mowgli had lived in the Lok Kawi zoo and also used in animal performances.

“After years of exploitation, Mowgli will now be used to woo tourists at Sepilok, this has got nothing to do with rehabilitation. A 12 year old ex performing male orangutan is not a candidate for wild release and the only reason Mowgli isn’t used at Lok Kawi zoo any longer is because he has become too big to handle. As he doesn’t have the skills to survive on his own, Mowgli will depend on daily food rationing at the SORC feeding platform, thus enabling tourists to be titillated by the presence of him and other orangutans.”

Friends of the Orangutans is asking the SWD to not release Mowgli into the Sepilok-Kabili forest for the safety of tourists, other orangutans and Mowgli himself, explaining that Mowgli might contract disease from tourists (and vice-versa), putting the health of his and other orangutans in the Sepilok-Kabili forest at risk. Tourism is also not allowed in great ape rehabilitation centres, according to the International Union for Conservation of Nature (IUCN) guidelines.

“For some months now we have privately asked the SWD not to send Mowgli to Sepilok, but all our pleas were ignored. Mowgli is too habituated to be released into the Sepilok-Kabili forest and may contract disease from tourist from touching or getting too close to them. Moreover, he will be 13 years old this year, growing bigger and stronger, and at this age can seriously injure tourists. And when this happens, it’s him who will pay the price, like what has likely happened to other orangutans from reports we have received from unknown individuals. Those irresponsible parties who have made profits from exploiting Mowgli, including the Rasa Ria Resort, should now pay for Mowgli’s lifetime care in captivity, with excellent care including daily enrichment provided.”

Singh also added the whereabouts of another orangutan is also unknown, and the NGO is concerned.

“More than a year ago we reported to SWD about Jackie the orangutan, a seemingly habituated wild orangutan who was also a tourist attraction at the Ranau Poring Hot Springs area. We were told she would also be sent to Sepilok but we have not got any updates on her despite numerous attempts to seek answers from SWD.”

The Director of FOTO concluded by urging all tourists to stay away from the SORC until Mowgli and Jackie’s future is resolved and that there is confirmation the former will not be released into the Sepilok-Kabili forest.

“Please don’t go to Sepilok to see orangutans until we know Mowgli and Jackie are safe and their future secured.”