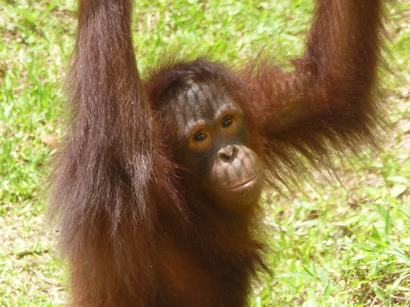 Friends of the Orangutan wishes to thank all supporters who played a part in getting Katarina transferred from the horrific Kuala Lipis Zoo in the Malaysian Peninsular to Taiping Zoo, 3 hours north of Malaysian capital Kuala Lumpur. This campaign started in November, after private negotiations with the Malaysian Wildlife Department failed to get Katarina moved out of the Lipis Zoo.

After a long, hard campaign, she was finally transferred on 12th February 2015.

We have received tremendous amount of support from supporters within Malaysia and around the world, and the petition for Katarina, which will be closed today 16th of February, has gathered over 14,500 signatures! On the 6th of February, we delivered this petition to the Malaysian Prime Minister’s office. We have also received a lot of support through social media platforms including Twitter, asking the authorities here to take Katarina out of the Lipis Zoo. Every single action by supporters has played a part.

Our campaign actually called for Katarina to be transferred to the Matang Wildlife Sanctuary, a sanctuary where orangutans and other animals live. It is managed by the Sarawak Forestry Corporation (SFC). Matang is actually the best place in Malaysia for captive orangutans. We have campaigned hard and done the best we could to get Katarina transferred there. However, the final decision on where Katarina should go rests on the Malaysian Wildlife Department, as they are the authority.

Taiping Zoo is head by the president of the Malaysian Association of Zoological Parks and Aquaria (MAZPA). It is one of the better zoos in Malaysia. Katarina will be a much happier orangutan at this zoo.

We will also be visiting Katarina and will bring updates and photos to post here.

We wish to thank you again for all the kind and relentless support from you, friends of Katarina, to help get her out of the Lipis Zoo. We could not have done this without you!

Friends of the Orangutans have more campaigns and projects coming up this year, stay tuned!

Note: Photo of Katarina in the banner above was taken at her previous home, the Kuala Lipis Zoo