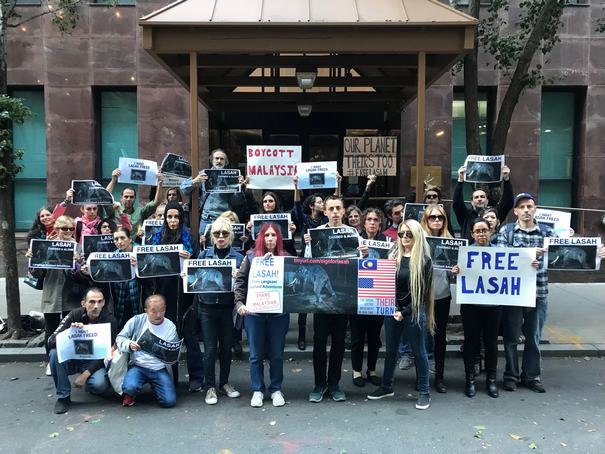 Photo: Their Turn’s protest out Malaysian consulate in NYC

On 12th August, Their Turn, an American animal rights organisation organised an amazing protest for Lasah outside the Malaysian consulate in New York City. The consulate knew the protest was coming, and it closed earlier than usual, which means authorities are paying attention to this campaign for Lasah, thanks to you. We did inform supporters about this protest in previous updates. Photos and video of the protest [thanks to Their Turn] are in the link below:

Over here in Malaysia we too of course are working hard on freeing Lasah and we will bring you more updates as our efforts progresses. In the meantime we are raising awareness publicly and we still welcome those who live in Malaysia to join us to campaign for Lasah. Non-Malaysians welcome too. We have materials for you to use and disseminate.

Thank you to those who tweeted to make the authorities here aware of Brigitte Bardot’s call for Lasah’s freedom. Over 1,500 of you tweeted! If you haven’t tweeted, please click here to tweet now.

From the time and effort we have spent thus far to rally supporters like yourself we’ve got over 7,000 tweets in total for this campaign. Thousands have written to the authorities in Malaysia. We ourselves have protested for Lasah here. And much more really!

More updates to come. Thank you for fighting for Lasah alongside us. Like you, we’ll never give up.

From,
Friends of the Orangutans Malaysia