According to a Tripadvisor post made by a tourist in March 2017, an orangutan attacked a tourist at the Sepilok Orangutan Rehabilitation Centre (SORC) in the East Malaysian state of Sabah. Our sources confirmed that this incident did take place. For many years SORC has been a huge tourist attraction. But unbeknownst to tourists the tourism at SORC doesn’t abide by conservation guidelines and it does have a negative impact on the apes. The Sabah Wildlife Department (SWD), which manages SORC, is aware of this. The lure of financial profit at the expense of Malaysian orangutans at SORC does have its effect on the apes. The orangutan who attacked the tourist, ‘Ceria’, a rehabilitated orangutan, isn’t named in the Tripadvisor post below. 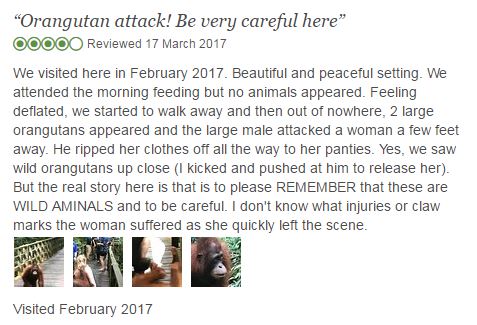 Read our media publication on the tragic death of Yoda the orangutan at SORC in 2016. Click here to read and share the publication.

The video below (not related to the attack) shows a tourist playing with two orangutans. We do not blame tourists for coming into contact with the apes for two reasons:

a) tourists are not educated on the risks of unsustainable orangutan tourism (disease, attacks) on themselves and the orangutans. Please click here to know why you should stay away from orangutan rehabilitation centres.

b) it’s mostly the apes who approach tourists at SORC