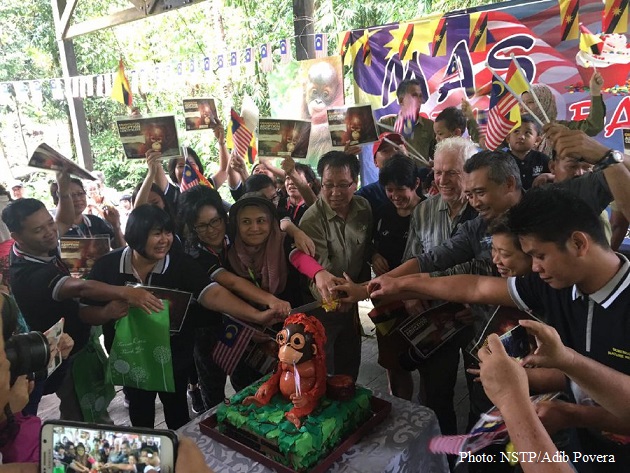 In September 2017 the Semenggoh Wildlife Centre, run by the Sarawak Forestry Corporation (SFC) threw a birhtday party for a baby orangutan called Mas, celebrating his first birthday. Mas was born in Semenggoh on September 16 2016. SFC were also encouraging people to adopt Mas. According to the SFC website “Semenggoh’s main attraction for visitors is its Wildlife Centre, where endangered species, once kept illegally as pets, are trained on how to fend for themselves before being released into the forest.”

This gives the impression that orangutans are being rehabilitated at Semenggoh but there is actually no rehabilitation taking place at Semenggoh. What is really happening is massive tourism and it surely does effect the orangutans. Baby Mas and her mother should be living in a forest far away from humans, which means not at the Semenggoh Nature Reserve forest.

The International Union for Conservation of Nature (IUCN) discourages tourism involving orangutans once familiar to humans as habituation is associated with physical risk and that of communicable diseases such as tuberculosis and hepatitis. There is also evidence to suggest that unsustainable orangutan tourism (in other words, doesn’t abide by IUCN guidelines) contributes to a higher infant mortality rate.

Our estimation is that Semenggoh Nature Reserve is only about 460 hectares (we are open to be proven wrong) despite claims that it is bigger than that, and SFC claims there are 28 orangutans, including 13 females (roaming in the non-contiguous reserve). However, our estimation is that there are only about 10-15 orangutans in Semenggoh. There is also the problem of inbreeding considering the tiny patch of forest. In reality, experts say that a female orangutan uses up to 1500 hectares while males use at least 3000 hectares. Even if Semenggoh is 1000 hectares in size, it is still insufficient to sustain a healthy orangutan population and avoid inbreeding, which will cause the population to plummet. There is no control of breeding of orangutans at Semenggoh.

There has also been rumours that there has been no veterinary care in Semenggoh for over 10 years and it will be sold off to a Chinese company. SFC is a for profit corporation. So we question, what is Semenggoh running an orangutan adoption program for?

Orangutans should be wild and never semi-wild and orangutan tourism at Semenggoh is all about tourism money and not conservation or rehabilitation. We urge the public to channel your donations towards ethical and genuine rehabilitation centres, the ones which do not allow tourism in or near its centres. If you would like to see orangutans in Malaysia visit wild orangutans in the forest where they are far away from humans, but strictly following IUCN’s great ape tourism protocols.