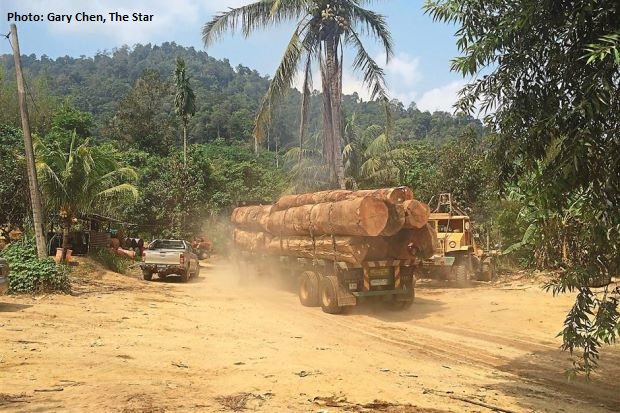 In May this year The Star exposed deforestation of valuable forests in the state of Kedah. Not long after consultancy group AidEnvironment released a damning report of thrashing of forest in the state. Timber from logging in the state is exported to outside Malaysia and given the ‘sustainable’ MTCC label. You can read AidEnvironment’s full report here.

Friends of the Orangutans revealed the extent of the deforestation currently taking place in Kedah in a publication by Malaysiakini and it can be read in full below. More news about the deforestation will be exposed on our website.

Despite the Malaysian government’s promises to protect our forests and the environment, deforestation is occurring on a destructive scale. As you read this article, forests in the Kedah state are being devoured on a daily basis, and this needs to be stopped.

Only recently The Star exposed rampant deforestation in the Ulu Muda forest reserve. Ulu Muda is a vital water catchment area as it supplies water to over two million Malaysians. It is also teeming with wildlife. Destroying Ulu Muda will not only severely disrupt supply of water but will lead to increased illegal wildlife trade, which is taking place at a alarming rate, to say the least.

In recent years, the Kedah state government approved logging leases in the virgin forests of the Ulu Muda forest reserve and just over the past four years at least 10,000 hectares of forests have been logged in Ulu Muda. So let’s not blame on forces of nature alone when water supply in Kedah, Perlis and Penang is severely affected.

Aside from Ulu Muda the pristine Gunung Inas forest reserve is also being destroyed, including at very steep slopes. In 2012, Sirim QAS, one of two forest management auditors of the Malaysian Timber Certification Council (MTCC), stated that deforestation in Gunung Inas had stopped after clearing was exposed by The Star. However, earlier this year deforestation simply resumed, including in forests above 1,000m above sea level.

Is it not the case that our government policies prohibit clearance on steep slopes and in forests 1000 metres above sea level?

Meanwhile, the primary forests inside Pedu forest reserve have not been spared either. Hundreds of hectares were cleared in 2012 and open burning to clear land continued into 2014. Bukit Perangin forest reserve has also been affected.

Is there no end to this avaricious madness? Much of the forests cleared above are primary or High Conservation Value (HCV) forests. Villagers in the area surrounding the reserves mentioned above are at risk of facing water pollution/shortages, landslides and flooding. The government must take immediate action and stop all deforestation in Kedah.

To make matters worse, the Kedah state exceeded its Annual Allowable Cut (AAC) by 283 percent between year 2009 and 2014.

One might ask, what happens after logs have been cleared from the forest reserves? They will be marketed globally with the MTCS label, claiming the timber originates from sustainably managed forests. Malaysians know that this is a farce but even locally, voices of dissent are ignored by MTCC.

Direct link to publication can be found here.