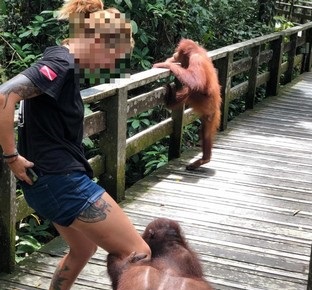 Based on an October 2019 Borneo Post news report, it appears that the Sabah Wildlife Department (SWD) is planning to move two “rehabilitated” yet humanised (over habituation to, and/or overdependency on, humans) orangutans, Rosa and Ceria, from the Sepilok Orangutan Rehabilitation Centre (SORC) to release them into the Tabin Wildlife Reserve (TWR), a forest in eastern Sabah.

Both Rosa and Ceria are reported to have arrived at the SORC for forest-release rehabilitation at age one, as orphans. As of 2020, Rosa is 19 years old while Ceria is 14. In the area of orangutan rehabilitation, it is not typical for orangutans rescued in early infancy to take 10-15 years to be rehabilitated and released into a forest as adults.

If their rehabilitation was successful, both orangutans should by now be living independently in a forest, away from humans. However, the hands-on volunteering practice, which took place at the SORC for over 15 years until early 2020, and unsustainable orangutan tourism at the centre increased the risk of humanisation among orangutans at the SORC, putting the apes’ future in jeopardy.

Humanisation can affect orangutans’ ability to build nests and forage in a forest. It causes the apes to lose their fear of humans and makes them far too comfortable with human presence and diverts their interest away from natural behaviours and interactions within the forest environment. This can increase their proximity to humans, escalating both the risk of attacks on humans and the risk of the apes contracting a disease from humans.

Rosa has been labelled as often seen at the centre (instead of the forest adjacent to the SORC) while she waited to steal from “her next victim”. She gave birth to her baby in captivity at SORC in May 2018. An alarming YouTube video shows Rosa and her baby on a tourist boardwalk near the SORC (they should be in a forest). We invite SWD to comment if Rosa’s infant is still in her care.

In Meet the Orangutans, an 8-part, 2016 Animal Planet documentary series about the SORC, Rosa is labelled as “head and shoulders above the rest [of orangutans at the SORC]” when it came to stealing items at the centre.

Ceria is known among SORC staff as a physical risk to them and tourists. We confirm that he attacked a tourist in 2017. The Meet the Orangutans documentary revealed that Ceria was attacked and injured by a pack of dogs near the centre.

We have discovered that the founder of a British orangutan organisation which supports the SORC privately expressed concern that significant problems could arise if the media found out about the behaviour of several humanised SORC orangutans. These male apes – Ceria, Sen, Mowgly and Poogle – are apparently a physical risk to tourists and staff (when left to roam around the centre). Sources also revealed that the centre was close to getting sued by a tour company for safety negligence caused by a humanised orangutan. If these apes only inhabited the forest adjacent to the SORC, surely they wouldn’t be deemed a risk?

Below are statements which have been made by British organisation Orangutan Appeal UK regarding Ceria’s behaviour.

– … causing mischief whenever possible! Keep a safe distance from Ceria if you spot him1
– … Bad boy Ceria has been hanging around the outdoor nursery again throwing rocks this time and now Kala has started to copy him!2
– He’s supremely interested in the human goings-on at the Centre and studies visitors and staff intensely, waiting for the next opportunity to wreak havoc3
– … he and a gang of other adolescent orangutans raided the Centre’s café… Ceria managed to open the ice-cream freezer and grab some treats4
– … one of the rangers was in the small wooden boat on the lake cleaning debris away, when Ceria came up to the shoreline, untied the rope and then tried to haul the boat in whilst the ranger was frantically trying to keep himself afloat5

Ceria’s behaviour, through no fault of his own, as indicated at the beginning of this article, is extremely alarming. No thanks to the Sabah state government’s insistence on exploiting SORC orangutans for tourism profits, Ceria chances of living a self-sustaining life in a forest, away from humans, may be in jeopardy.

All that is stated above undoubtedly raises serious doubts about the real reasons for the SWD wanting to relocate Ceria and Rosa out of the SORC.

On 22 January 2020 we wrote to the SWD to ask that no SORC orangutan is released into the TWR without the centre first fulfilling these two demands:

– Present its plans for the release of Ceria and any other SORC orangutan into the TWR to the IUCN/SSC Primate Specialist Group. This should include available data which led the department deciding to move the orangutans to the TWR.

– Inform how long it plans to conduct Post-release Monitoring and publish the monitoring data (as recommended by the IUCN), or at least submitting it to the IUCN/SSC Primate Specialist Group. The IUCN recommends monitoring be done ideally for at least a year.

If Ceria and Rosa are released into the TWR without the two demands being met members of the public and the media may mistakenly believe that the release is an immediate conservation success. A release can only be called a success if an orangutan is proven to be self-reliant in a forest after release – building nests and foraging efficiently while steering clear of humans. This can only be determined through persistent Post-release Monitoring.

Previous releases of a humanised orangutan called Tiger unsurprisingly failed and his fate is now in doubt once more. In September 2019 the SWD once again said they plan to release Tiger. There should also be full transparency about plans for his future. Read more about Tiger here. 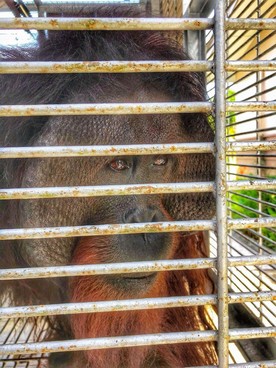 Photo: Tiger in a cage at the SORC

We welcome the SWD and the KePKAS Ministry to respond to this article.