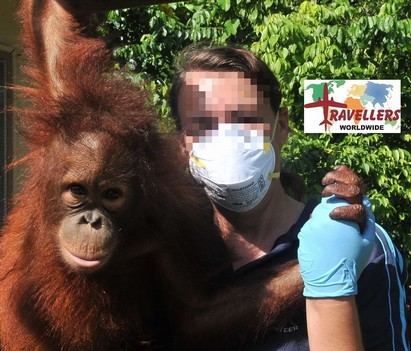 15 July 2020 update – Travellers Worldwide ceased trading in February 2020. The Sabah Wildlife Department confirmed in June 2020 that members of the public would not be allowed to take part in the rehabilitation process of orangutans at the SORC any longer. Read our statement here. However, we highly recommend that you read the article below to understand why hands-on orangutan voluntourism should not take place at a rehabilitation centre.

Travellers Worldwide is a British company which is refusing to stop the exploitation of Critically Endangered Malaysian orangutans, an animal at risk of extinction. The exploitation is approved by the Sabah Wildlife Department, the Sabah state wildlife agency which manages the SORC.

Every four weeks the company sends up to 12 unqualified individuals to the Sepilok Orangutan Rehabilitation Centre (SORC) in the Malaysian Bornean state of Sabah, Malaysia, for them to take part in the rehabilitation of orphan orangutans. Each individual pays around US$ 3,400. This is simply another form of exploitative voluntourism.

Orangutans undergoing rehabilitation should only be exposed to, and bond with, the minimal number of caregivers as possible in their early years as the apes are guided through the rehabilitation process. Rehabilitation at the SORC should be done by SORC staff only.

Having ever-changing personnel working hands-on with rehabilitant orangutans increases the risk of the apes becoming humanised (over habituation to, and/or overdependency on, humans). Humanisation diverts the orangutans’ interest away from natural behaviours and interactions within the forest environment.

Orangutan conservationists have warned that humanising rehabilitant orangutans can:

The last three points above refer especially to ex-rehabilitants who have been released into a forest. All points above can have dire consequences on the future of a species fighting for its survival.

The conservationists also recommend that orangutan rehabilitation be limited to a closed, qualified and stable group of people who always work with the same orangutans, ideally through their entire rehabilitation. These few dedicated caregivers promote trust and provide social and emotional support to rehabilitants.

Exemplary orangutan rehabilitation centres, such as those run by reputable organizations International Animal Rescue and the Sumatran Orangutan Conservation Programme (SOCP), do not allow tourism, including volunteerism.

We informed Travellers Worldwide the effects their volunteering practice can have on the rehabilitant orangutans at the SORC, yet they have chosen to ignore us in favour of continuing to exploit Malaysian orangutans.

We call on the new Sabah state government and its Environment Minister, Datuk Christina Liew to put an end to the exploitation to help with the future of Sabah’s orangutans.