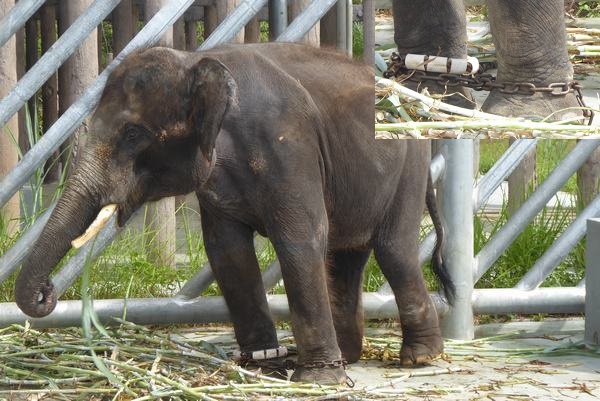 Talong and Seri are two young Asian elephants at Kemaman Zoo, the only zoo in the east coast Malaysian state of Terengganu. Both elephants were caught in a forest in Terengganu, indicating that they were born in the wild. We estimate they arrived at the zoo in 2011.

In a set of disturbing videos and photos, taken in May 2019 and obtained by Friends of the Orangutans, Talong, a ten-year-old male, is seen appallingly shackled at Kemaman Zoo.

A one minute video reveals both of Talong’s front feet chained, which would have rendered him almost immobile – under the searing Malaysian sun. Water is seen available in the video. However, elephants are inclined not to consume warm water.

The area in which Talong is tethered is the ‘new’ elephant enclosure at Kemaman Zoo, constructed several years ago and appears to have remained unused as the two elephants at the zoo are still kept in a different enclosure.

Both him and Seri – a twelve-year-old female – were sent to Kemaman Zoo about ten years ago. The transfer was made possible by PERHILITAN, the Peninsular Malaysia wildlife department.

A 2017 video shows Talong chained on one foot in the rain at the zoo. He can be seen swaying his head back and forth, a stereotypical behaviour among captive elephants under psychological distress.

While the photo below, likely taken in 2011, show either baby Talong or Seri shackled in chains at Kemaman Zoo, surrounded by two individuals with a bullhook in their hands. One of the staff is wearing a shirt bearing the PERHILITAN logo (image has been resized). 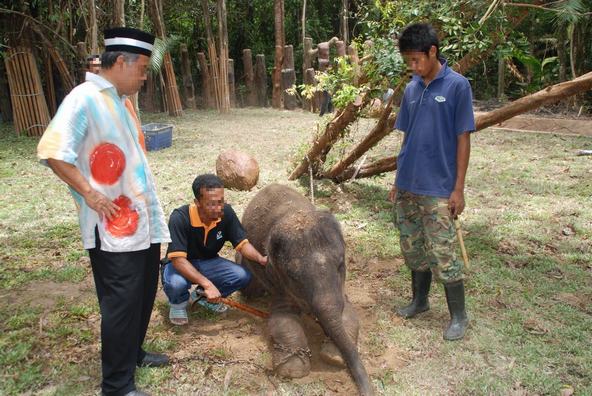 The use of bullhooks is no secret in many captive facilities in Southeast Asia and around the world. An elephant keeper uses a bullhook to assert and maintain dominance over elephants in their care. According to Dr Philip Ensley, an elephant veterinarian with almost 30 years experience working at the San Diego Zoo:

“Elephants are conditioned to fear the bullhook at an early age. The bullhook, which has a metal hook and spiked tip, plays a critical part of the [captive] baby elephant’s early training.”

Why was Talong seen in chains in the 2017 and 2019 videos? PERHILITAN needs to respond and inform the public how it will guarantee that elephants at Kemaman Zoo will be treated humanely.

Could it be due to inadequate facilities to meet both elephants’ complex needs? Do the elephants receive sufficient enrichment daily? The current elephant enclosure at the zoo, like at most Malaysian zoos, is tiny. These may also increase the frustration of growing elephants, making them more challenging to be managed. In the wild elephants travel through wide, open areas for miles.

Photo: Talong and Seri in the current elephant enclosure at Kemaman Zoo

PERHILITAN should also explain what improvements will be made in the new enclosure, as an elephant previously stated that it is “flawed.”

Forcing elephants to only live in pairs, especially from a young and in a substandard environment may cause psychological problems for these gentle beasts.

According to a June 2018 news report, a stunning RM 60 million had been spent on expanding Kemaman Zoo, a state-owned zoo which is reportedly bleeding money.

The images and videos undoubtedly raise questions about the welfare of elephants and other animals at the zoo again. See other articles and reports related to Kemaman Zoo at the end of this article.

In 2011 Association of Zoos and Aquariums (AZA) announced that North Americans zoos would need to make the transition towards protected contact management:

“As soon as possible and no later than September 1, 2014, elephant care providers at AZA facilities with elephants shall not share the same unrestricted space with elephants, except in certain, well-defined circumstances”

PERHILITAN should stop sending elephants in its care to zoos that do not have or are unwilling to provide modern facilities for captive elephants to ensure their welfare.

NGOs: End the Abuse of Animals at Kemaman Zoo

Perhilitan: Nothing Untoward at Kemaman Zoo

In pictures: Years of appalling treatment of Malaysian orangutans at Kemaman Zoo