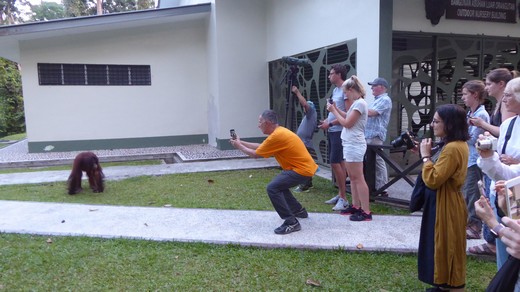 Over the years, researchers have provided ample evidence that great apes, including orangutans, are susceptible to human diseases, including respiratory ones. Humans are also known to be vulnerable to great ape pathogens. The human coronavirus OC43 (HCoV–OC43) is known to infect chimpanzees. Whilst it is still unclear whether great apes are prone to the novel coronavirus SARS-CoV-2, which causes Covid-19, the International Union for Conservation of Nature (IUCN) has stated that, for now, it’s best to assume that great apes are susceptible.

In March, the Sabah Wildlife Department (SWD), which manages the Sepilok Orangutan Rehabilitation Centre (SORC), announced that it was temporarily closing the doors of the SORC to tourists after the Malaysian government imposed a movement control order. The SWD is the Sabah state government wildlife agency under the Ministry of Tourism, Culture and Environment Sabah (KePKAS). The SORC reopened for tourism in June and closed again in early October.

We do not doubt that the centre’s staff is concerned about the potential Covid-19 risk to orangutans and themselves. There have, however, been unsustainable tourism practices at the SORC for more than twenty years. In pursuing such practices, the SWD has shown an evident lack of regard for the health not only of the orangutans at the centre but also of the staff and tourists. It is high time the SWD prioritised the health and welfare of orangutans and those caring for them, not profits.

The IUCN’s great ape tourism guidelines, authored by conservation experts, state that tourism should not be allowed at orangutan rehabilitation centres or in forests that are home to orangutans that have been released after rehabilitation. This advice must be adhered to minimise both orangutan humanisation (over habituation to, and/or overdependency on, humans) and disease transmission risks.

The SWD ignored this recommendation. During twice-a-day visiting hours at the SORC, tourists were ushered into a forest adjacent to the centre to view orangutans, including released ones. The number of tourists who have visited the SORC daily is vast. Research has shown that tourism at the SORC can increase the risk of disease being transmitted to the orangutans.

Numerous children have visited the SORC. This is despite the fact that the IUCN guidelines state that children under the age of 15 should not be allowed to visit great apes as they are more likely than adults to release pathogens.

The practice in the forest at the SORC has been to place food on a platform to lure orangutans and enable tourists to see and photograph them. According to experts’ guidelines, this practise is unacceptable, and it is unlikely to be without consequences. A study published in 2008 has revealed that the infant orangutan death rate is higher at the SORC than in zoos. The authors of the study stated that the possible increase in disease transmission and aggression that resulted from frequent close encounters among orangutans gathered at the feeding platform might be one reason for this high death rate.

Not only has the main IUCN recommendation about tourism restrictions been ignored at the SORC, but other expert advice has also not been followed; there should be no more than four people in any group of tourists visiting great apes, and only one visit per day should be allowed. The IUCN also recommends the periodic closure of centres such as the SORC, but the SORC has always operated all year round.

Humanisation also causes orangutans to lose their fear of humans and this has resulted in orangutans often being seen roaming terrestrially at the SORC. This undesirable behaviour brings some of the orangutans to within just a few metres of tourists and staff during visiting hours. There is a higher prevalence of malarial infection among orangutans at the SORC than among wild orangutans and research has shown that this could be because of their close proximity to humans.

The IUCN guidelines state that to reduce the risk of disease transmission, tourists should wear a face mask if they come within ten metres of great apes and they should never get closer than seven meters.

In an April news media report, the SWD is quoted as saying that it started handing out face masks to visitors when the Covid-19 pandemic began. The use of face masks should have been made mandatory at the SORC years ago. Research has shown that tourists who are ill do visit the SORC, and this has included people showing symptoms of respiratory illness. This increases the risk of pathogen transmission to orangutans and staff. Providing disinfectant foot dips and hand sanitisers is essential, but such measures are insufficient.

We recognise that many local people earn a living through tourism at the SORC. However, the SWD must urgently draw up plans for a transition to sustainable orangutan tourism in Sabah, and adopt all IUCN guidelines about great ape tourism. In an 11 June email to Friends of the Orangutans, the SWD stated that it is “well aware of the IUCN Best Practice Guidelines and is trying its best to follow the recommendations when possible.” Less than a month later, we published an article explaining the continuation of unsustainable tourism at the SORC, amid the Covid-19 pandemic.

The implementation of sustainable orangutan tourism in Sabah may take time, but the SWD must be transparent about the process. If unsustainable tourism continues at the SORC, a boycott campaign will become inevitable.