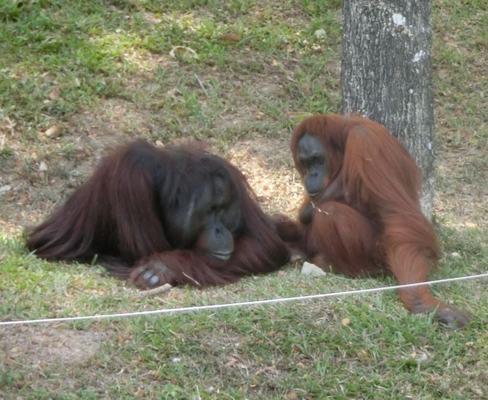 Six years ago, two pandas were imported into Zoo Negara from China. Since then, millions of dollars have been spent on the maintenance of the animals. Zoo Negara vice-president, Rosly Ahmat Lana, boasted back in 2014 that the zoo’s Giant Panda Conservation and Exhibition Centre was the “biggest and best in the world.”

Zoo Negara houses four Bornean orangutans. While the pandas are kept in what appears to be a state-of-the-art facility, the four apes are constrained in two visibly substandard outdoor enclosures. These enclosures are not fit for purpose and unacceptable, especially since Malaysia is a country home to the critically endangered Bornean orangutan species.

What the apes need in the odd-looking, sloped enclosures are elevated platforms connected by robust horizontal ropes to allow them to mimic some of the natural behaviours of wild orangutans, and enable them to exercise to maintain their physical and mental wellbeing. There is an insufficient shade to protect the apes from the searing Malaysian sun in one of the enclosures.

Both enclosures also lack privacy barriers, another essential feature for captive orangutans to rest out of the sight of zoo visitors and other apes when they choose to do so – important to reduce the apes’ stress in captivity.

Friends of the Orangutans (FOTO) first contacted the zoo management about these concerns over two years ago. We also wrote to the zoo in May this year. The zoo management has only taken minimal action. Based on our investigations at the zoo, the orangutans are mostly seen on the ground, looking bored and listless.

‘The most important aspect of the captive physical environment for orang utans is the amount of arboreal space available for both rest and locomotion (Maple 1979; Maple and Stine 1982; Jones 1982). Horizontal arboreal pathways and nesting/resting platforms are the main elements of the natural physical environment (Jones 1982). The lack of opportunity for arboreal locomotion promotes lethargy and contributes to obesity (Maple 1980). The combination of lethargy and living on the ground causes health hazards.’ 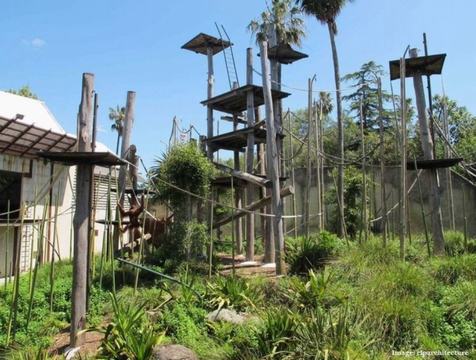 An orangutan enclosure at an international zoo. Not the best, but a far cry from Zoo Negara’s enclosures

Zoo Negara is a member of the World Association of Zoos and Aquariums (WAZA). According to the WAZA Code of Ethics and Animal Welfare:

Zoo Negara, a member of the World Association of Zoos and Aquariums (WAZA), is no stranger to controversy. Earlier this year, FOTO exposed the zoo for its cruel treatment of Sumatran orangutans and chimpanzees and failing to comply with zoo regulations. Although the zoo was forced to take action, PERHILITAN, the Peninsular Malaysia wildlife department, is yet to announce if it will penalise the zoo.

In our letter to the zoo in May, we asked the management to provide evidence to the Malaysian public about how its wildlife ‘research’, ‘conservation’ and ‘education’ (as stated on the zoo website) helps to protect the habitat and increase the wild population of all animal species the zoo maintains.

The management has not responded, and in the meantime, Zoo Negara continues to ask the public for donations.

The zoo also did not respond to our demand for it to cease breeding its Bornean orangutans and chimps. (Sumatran orangutans at the zoo are fraternally related, and must not be bred). Captive breeding of chimps and orangutans is not conservation and intentional breeding of these animals to only keep them captive for life is unethical.