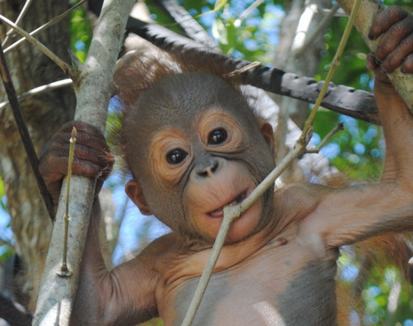 Friends of the Orangutans • 14 October 2020. The featured image above is not of either of the two orangutans mentioned below.

The Sabah Wildlife Department (SWD), the Sabah state government wildlife agency that manages the Sepilok Orangutan Rehabilitation Centre (SORC) in Sabah, Malaysia, has not informed if investigations carried out to determine what happened to the mothers of Nami and Zorro, infant orangutans that were orphaned and now at the SORC.

According to the British charity Orangutan Appeal UK website, Nami was “surrendered” to the department when she was 18 months old, while Zorro was found “all alone at the edge of plantation [sic]” when he was three.

On 30 September Friends of the Orangutans emailed the SWD to ask the department these questions about Nami and Zorro:

The SWD has yet to respond. The department deserves praise for saving the two infants. However, it should be transparent and explain to the public if investigations were carried out to determine what likely happened to the mothers of the two infants. Orangutan mothers do not easily abandon offspring in their care and may even put their own life at risk to defend their young. Investigations should be started if they were previously not done.

Transparency from the SWD is also crucial as funds are publicly being raised for Nami and Zorro – the SORC is a rehabilitation centre owned by the Sabah state government.

Friends of the Orangutans have previously revealed questionable practices at the SORC – see our publications at the end of this article.

Based on information we received, over 150 orangutans were sent to the SORC between 1998 and 2008 (we welcome the SWD’s response if this figure is inaccurate). Were most of them infants? What happened to their mothers?

You can help raise awareness and ask the SWD to be transparent and inform the public if the department had carried out investigations to determine how Nami and Zorro ended up orphans. Here is what you can do:

Copy the two email addresses below into the CC list. They are emails of the SWD and the Sabah environment ministry: