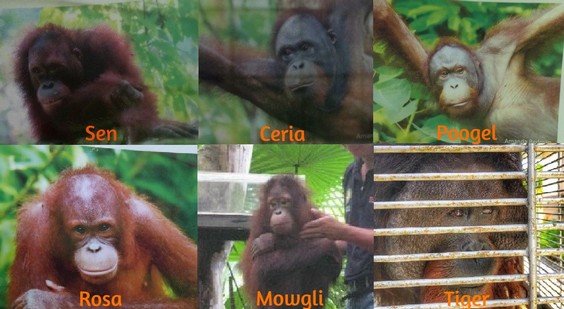 There are genuine concerns over the unexplained fate and welfare of six Critically Endangered orangutans at the controversial, tourism-based Sepilok Orangutan Rehabilitation Centre (SORC).

The Sabah Wildlife Dept (SWD) – which used to supply orphaned infant orangutans at the SORC to a luxury hotel on the pretence of rehabilitation – is the Sabah state wildlife agency that controls the SORC. It has not demonstrated transparency to the public about the current situation of these six apes for over six months now.

What can you do now to help the six orangutans?

The six orangutans are Ceria (age 15), Rosa (18), Mowgli (18), Poogle (17), Tiger (22) and Sen (15). All were sent to the SORC in infancy – supposedly for rehabilitation to prepare them for wild-release – after being made orphans; their mothers might have been killed. However, the details provided below indicate that their rehabilitation may have failed, and the apes have been humanised.

What is orangutan humanisation, and what causes it?

In orangutan conservation humanisation refers to an orangutan’s over habituation to, and/or overdependence on, humans. It can fail orangutans’ successful return to a fully independent forest life as it can affect their ability to build nests and forage in a forest. It causes the apes to lose their fear of humans and makes them far too comfortable with human presence and diverts their interest away from natural behaviours and interactions within the forest environment. This can increase their proximity to humans, escalating both the risk of attacks on humans and the apes’ risk of contracting a disease from humans.

Unscrupulous hands-on voluntourism practices, which took place at the SORC for over 15 years until early 2020, and unsustainable orangutan tourism increased the risk of orangutan humanisation at the SORC, putting the apes’ future in jeopardy. For 20 years until 2016, the SWD supplied orphaned, infant SORC orangutans to a luxury hotel in Sabah under the pretence of rehabilitation. We campaigned and stopped the exploitation in 2016.

The risks of humanisation and disease transmission led the International Union for Conservation of Nature (IUCN) to conclude that tourism should not be allowed at orangutan rehabilitation centres.

Why are the concerns for the six humanised apes?

Rosa, the only female orangutan among the six, is known to steal from items at the SORC and “her next victim”. Through no fault of his own, Ceria has displayed worrying behaviours, including attacking a SORC tourist. He has been injured by a pack of dogs near the centre – as was revealed in ‘Meet the Orangutans’, a maleducative 2016 Animal Planet documentary series about the SORC.

According to our sources, Tiger has been kept in a cage at the SORC since December 2018 after his second release into Tabin Wildlife Reserve* (TWR) failed.

We discovered that before Tiger’s second release the founder of a British orangutan organisation that supports the SORC privately expressed concern that significant problems could arise if the media found out about Mowgli, Poogle, Sen, and Ceria’s behaviour. These apes are a physical risk to tourists and staff (when left to roam around the centre). Sources also revealed that the SORC was close to getting sued by a tour company for safety negligence (physical danger by a humanised orangutan).

Based on information from a source Mowgli, Sen, Ceria and Poogle are very terrestrial at the SORC and have shown not much interest in forest life.

Allowing humanised orangutans to roam around the SORC may be a threat to staff and tourists It would be a public relations disaster for the SWD and the Sabah Ministry of Tourism, Culture and Environment (KePKAS) if an orangutan injures another tourist at the SORC and media finds out about it. It is no surprise then that according to our sources, like Tiger, Ceria and Sen are also kept in cages at the SORC.

No transparency from the Sabah Wildlife Department

An October 2019 Borneo Post news report indicated that Ceria and Rosa would be released from the SORC into TWR. In January 2020, we wrote to the SWD to express our concern about the reported release plan and asked the department first to present release plans and available data which led the department deciding to move the orangutans to TWR to the IUCN/SSC Primate Specialist Group. We also asked the SWD to inform for how long post-release monitoring** (PRM) would be carried out.

Mr Tuuga also indicated that the SWD was contemplating building an enclosure to keep some unreleasable orangutans in, instead of confining them to life in cages. He, however, did not provide details about the six orangutans stated above.

We continue to demand the SWD to show complete transparency on the management and futures of Ceria, Rosa, Mowgli, Poogle, Tiger and Sen.

*A 120,000 hectare protected forest reserve in East Sabah. It is surrounded by oil palm plantations

**When rehabilitant orangutans are released into a forest, researchers need to monitor them to ensure that they can adapt and survive, including to forage efficiently. During monitoring, vital data is collected. Monitoring also enables human intervention if an orangutan is unable to adjust or requires medical attention. Therefore, post-release monitoring (PRM) is also crucial for welfare reasons. The IUCN recommends PRM be conducted for at least one year. Only when an orangutan has consistently proven to adapt and survive independently can the ape’s rehabilitation be considered a success.